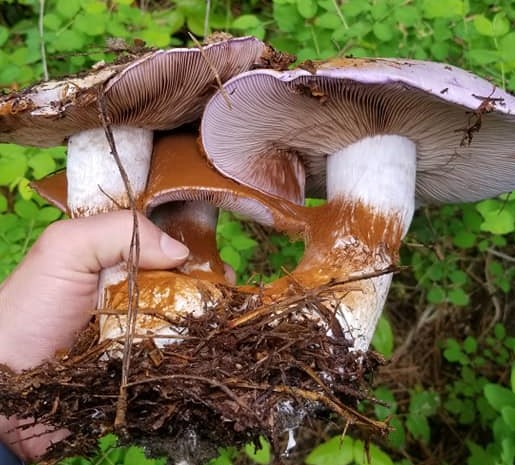 One of the cool things about collecting mushrooms is that many species do not fruit every year, providing the opportunity for surprises. In the spring of 2020, we had several reports of a large, gregarious, purple Cortinarius which had not been recorded before. I was able to sequence one of these collections and it matches the type of Cortinarius citriolens. Keep an eye out for this distinctive species if you are out in the PNW in early summer.

What is Cortinarius citriolens?
Cortinarius citriolens is a large, gregarious Phlegmaciod species with purple cap, lavendar gills and a fragrance of citrus. The species was described by Moser and Ammirati in 1999, from collections in Wyoming USA. It has been confirmed from Quebec, Finland and Sweden. The name refers to the “strong fragrant odor of lemons or lemon pelargonium” (citri-olens = citrus-smell).

Phylogenetics:
This collection is match (one base variation) to the type NR_130208.1.